Reflections from Singapore Fintech Festival: The Seven Biggest Whispers about Fintech for 2020 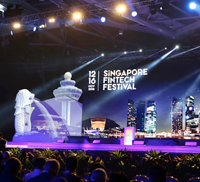 Reflections from Singapore Fintech Festival: The Seven Biggest Whispers about Fintech for 2020

There are a number of conferences – some are leaders and have been around years and some have evolved and grown in recent times – some simply explode in the right place at the right time.

It seems that the Singapore Fintech Festival has a hand in each of these varieties. And this year it has gone beyond expectation with attendance and more importantly some net new evolutionary conclusions about this vibrant ecosystem.

As the event closed, I wanted to share some thoughts emerging which I had not heard before at the level of conviction I heard at this conference; some are quotes from prominent players and some are the things that were not said but in my opinion existed as a recurring theme. Some are no doubt controversial, we shall see. It has to be said the majority of this came from the keynote speakers who were either incumbent banks or institutions, or the biggest fintechs who had already “made it”. Not so much from the smaller guys trying to change the world. Ultimately, it’s the sentiment and themes that were interesting and as always it begs the question – do you agree?

1.    “Fintech is failing to deliver, with very few exceptions”

It may be a surprise to hear but the word on the street is that Fintech is failing, with very few exceptions. Yes there are Airbnb and Uber, perhaps Amazon and Tencent/Ant are better examples, which are true fintech with disruptive models that scaled, however the masses are just not actually managing to solve any of the fundamental problems or moving any material needs of basic change. The concepts are there but delivery on real disruption and scale, few are achieving. Fintech is certainly trying and it’s a buzz of energy and enthusiasm, but it is starting to represent a mass of huge noise of promises. Fintechs indeed have great mobile everything user interfaces but that’s the expectation now for all players not a differentiator, so how long until, and how do you find, the next killer proposition amongst the masses, and when do they need to turn a profit!!

2.    “Fintech and Bigtech are introducing risks that are potentially economical and systemic and simply unknown new territory. It will be considered in depth quickly (meaning regulators will expand their net significantly)”

Interestingly at the conference, rather than many people focusing on what’s the next big thing the fintechs are delivering, it became a theme to consider the risks the existing fintechs have/are opening. We all know some fintechs skirt around compliance and hence have significant lower costs than regulated entities, but what risk does that really present? Perhaps not much when it’s only 1 million customers but at 100m (fintech) or 1 billion (bigtech) that’s a different game. There was a sense of fatigue with attendees; over 500 exhibitors so how could you possibly absorb that? Some stated too much noise of ‘me too’ and not sustainable models; I guess WeWork was a recent eye opener for some. Of course the flip side is true too; even more people entering into fintech looking to deliver to their own billion dollar dream!

3.    Is a digital bank really different?

Digital banks are seemingly now defined as traditional banks without branches, admittedly with better mobile apps and lower cost infrastructure; but most fundamentally there is very little real value innovation delivered. The differentiators between the fintech banks and traditional banks are already starting to disappear as the more active top banks turn, and their offerings are closer than people think. There is still a strong trust and reputation element and a fundamental business momentum with the incumbents, so it was stated several times how many fintechs can genuinely defend themselves against a mega bank catching up now the new playing field is defined.

Traditional banks in the long term will replace what fintechs are doing and do it better. They have money, business and risk experience. They maybe slow followers to the fintechs but they have many abilities including spinning up small organisations within themselves to appear that they are fintech looking – whereas on the backend they keep using traditional banking services which they slowly adapt to the new world.

5.    The major opportunity is around offering customers a guaranteed SLA

The major difference between the traditional banks and fintechs is the ability to offer strong non-functional requirements with Key Performance Indicators (KPIs) and Service Level Agreements (SLAs). There has been a glut of news stories around security, reliability, performance, maintainability, scalability, and usability. When any organisation attempts to work and deliver at pace, these are the things that are sacrificed, sometimes unknowingly. No one really offers a guaranteed SLA today, so it is an opportunity for all players. This could counter the ‘fintechs being new risks’ theme.

Trying to do all things for all men is a losing strategy. The key is to do what you do well and leave essentially commoditised already plays to expert partners. The most successful applications of Open Banking to date were stated as 1) account aggregation 2) personal finance management and 3) enabling 3rd parties to do payments. Given the amount of money and effort put into Open Banking, there has to be a huge new set of successes coming.

7.    Green Environmentally Sustainable companies are quickly rising to be the next generation darlings of investment and scale

This for me was the greatest, most pleasant surprise of the conference in that I had never seen so much traction and investment as it is attracting. The theme was common at the conference and everyone seemed to have bought in. Given the average fintech generation age and their passions it’s not really surprising but I hadn’t seen the mainstream level of investment appetite this strong before. Certainly a ‘watch this space’ topic which could overtake AI and Blockchain J

In summary, the common view from the market owners was in many ways fintech has delivered to the hype level but not delivered to the fundamental solutions. It has disrupted traditional banking and the financial services sector has exploded with new customer segment propositions, and one top tier bank CEO even thanked the fintech audience for that. There is now a maturity and fatigue setting into the experienced incumbent financial services community and the major investors. Rather than looking for the next killer proposition, it’s now more about themselves again and longer term assessments; what happens when it’s all the norm in fintechs and incumbents, what happens with the risks and market conditions, what happens in a global market downturn or when interest rates go up and investment capital is not so free flowing? It’s clear the low end funding availability is already decreasing and the high end increasing, reflecting a changing risk appetite.

The incumbent Banks, however slow to turn, are clearly now committed and will partner fintechs until they don’t need to.

FinTechs partnering with incumbent banks/institutions appears to be the key opportunity for the vast majority of fintechs for the next 3-5 years (maybe even later in slower regions) as the banks need to go to market now/constantly with “fintech-like” offerings to maintain market position while they turn internally, but after that, only those fintechs that are truly defensible will likely survive (Dot-Com 2 dare we think?!).

There are over twenty thousand fintechs worldwide and it seemed many of them were at the Singapore Fintech Festival!

It is far from a boring world, and I still say some of the Asian Bigtech players are about 10 years in front of everyone else’s capabilities worldwide, however political boundaries are strengthening to stop mega players conquering new territory quite so easily, so again it’s not all about tech, but that’s another world of discussion!

Please let me know your thoughts and your biggest take-aways from Singapore. And what do you think 2020 tangibly will bring us? Another Airbnb, Uber, Tencent/WeChat or more WeWorks?#SingaporeFintechFestival#Fintech#Singapore