How Crypto Is Disrupting the Financial Ecosystem 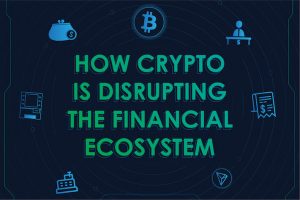 How Crypto Is Disrupting the Financial Ecosystem

Since Bitcoin popped into our lives in 2009, cryptos have managed to climb the rungs of the financial world.

In the relatively short amount of time they’ve been around, they have stirred up quite a storm. Indeed, cryptos are still disrupting fintech in fascinating ways.

Their use is so widespread that many businesses have even begun to use Bitcoin to pay their employees. But the question is, is it a good idea to use cryptocurrency to facilitate the livelihoods of workers?

What are the Benefits?

Using cryptocurrency to pay employees definitely has its perks.

Fiat currency takes a while to travel from one account to another. Security regulations are put in place to ensure safety, but this accuracy causes transfers to take quite a while.

But moving cryptocurrency around takes far less time. Its lack of regulation means there’s virtually no red tape to bog down the trajectory from employer to employee. Furthermore, cryptos can be converted into any traditional currency, so employers can easily pay workers from different countries at once.

2. Variety of Options for Receivers

Once a bitcoin reaches the employee, they have several options. They may convert it into their currency of choice, which is a safe option most would opt for. Alternatively, they might elect to spend it directly.

But they could also hold on to it, hoping that the value of Bitcoin will grow. That way, they might create even more profit, much like an investor would. This stands in stark contrast to fiat currency, which lacks the kind of rapid growth that cryptocurrency boasts about.

The backbone of Bitcoin–and many other cryptocurrencies–is blockchain technology. In a nutshell, a blockchain is a digital ledger. It enables easily trackable, virtually unhackable, authority-less transfers with indelible record-keeping.

Moreover, identity theft is nearly impossible, since accessing the blockchain requires a digital key too complicated to copy by any means. Thus, as it turns out, blockchains actually provide a more secure means of transfer than traditional banking does.

Problems with Bitcoin as a Salary

Before you get ahead of yourself, you should take into consideration the fact that Bitcoin may be perceived as a somewhat questionable method of payment.

For one, the status of cryptocurrency is still hotly debated. Some countries consider cryptocurrency to be securities, while others are adamant that they’re commodities. The difference is critical, since securities abide by special laws, and this distinction may have serious effects on how to handle them in certain countries.

Secondly, those who know of Bitcoin have surely heard about its wild price fluctuations. Such high volatility may cause employees to think twice before accepting cryptocurrency as payment. Even though they could exchange it for their country’s currency, people might still get scared. Nobody likes playing fast and loose with their livelihood, after all.

Is it Worth it?

All things considered, paying your employees with Bitcoin is great in some instances.

It makes sense when talking about payment from different countries. Doing so with crypto is simply faster and safer.

But it’s also important to consider the inherent problems with such a new, unregulated form of currency. And people’s fears of crypto collapsibility might make them wary.

At the end of the day, it truly depends on the company’s position and the workers it employs.