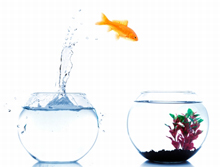 In my last contribution to this blog, I made some fairly broad (and arguably common sense) statements on why change programmes often deliver disappointing results and what powerful forces come into play that will prevent an organisation from effecting change .  It would seem only fair, therefore, to consider what approach organisations should adopt to ensure that their change initiatives – big or small – are more successful.  Whilst there is no magic bullet, there are obviously steps that can be taken in order to increase the chances of delivering change:

The purpose of any change initiative is to change the course of the organisation away from where it’s currently headed (its ‘default’ state) to an improved future.  Some initiatives will be small and therefore make a minor contribution to changing the trajectory, while others will be ‘transformational’ and aimed at making a significant step change.

What’s important is that individually and collectively they change the influence of the targeted driving forces, thereby altering the trajectory of the organisation. If a change initiative is not aimed at one or more driving forces it will have little or no impact on the current direction and nothing will change; it therefore becomes change for change’s sake.

Most large organisations have a Portfolio Management capability; understanding how the portfolio of change initiatives will alter the influence of the driving forces (and thus the direction of the organisation) is of utmost importance in creating an environment for change success.  A portfolio of change needs to be intentionally designed to change the trajectory of the organisation, and that the design must be based upon a thorough analysis and understanding of the forces driving the company, moreover it should define which forces are being targeted and how their influence will be changed.

This may well be stating the obvious, but it’s imperative that collective power of the change initiative is sufficient to have impact on the targeted driving forces, if the course of the organisation is to be influenced.  This power comes from the number, capability and experience of the people accountable for delivering the change, the level of commitment of senior leadership and the chosen approach.

So whilst the first condition for success ensures that the change initiatives are targeted on the forces controlling the current trajectory, the second ensures that they possess sufficient power to have impact to change the course of the organisation and to attain the improved future.

It is vital that an organisation has the infrastructure in place to support the ‘mechanics’ of change.  This does not refer to technical infrastructure, more that clear roles and accountabilities, plans, project structure, programme office, communications and reporting are in place; i.e. all the basics of good project, programme and portfolio management.

It would be a bold move to criticise organisations for their project management capabilities, as I can state from personal experience that I have seen huge improvements in the companies where I have worked – and this isn’t just down to the adoption of some formal methodology.  It is more likely to be the wider portfolio management role that still remains a relatively weak capability in the majority of organisations.

It’s vital to have measures in place that will illustrate that the path of an organisation is changing, and these need to be ‘leading’ rather than ‘lagging’ indicators.  Lagging indicators are things such as costs, revenues, and technology implementations and are more likely defined as the infrastructure or mechanics required for change.  Leading indicators will let you know whether you’re moving in the right direction much earlier than you would be able to glean from conventional management or financial information.  Such measures are, however, are qualitative rather than quantitative and may be based more on people’s feelings.

The most important condition in creating an environment for successful change is to have people in place with the ability to make decisions and be accountable for ensuring that the other elements described above are established and maintained.  This governance structure should cover not only the individual change initiatives, but the entire change portfolio.

It is a common misconception that governance in a change programme rests with the ‘Steering Group’ which is the name usually assigned to a governing body (depending on which methodology is being adopted) and that this forum should steer and review progress. The danger of this perception is that it puts the steering group in a reactive mode, responding to issues as and when they emerge, whereas this should be the responsibility of people leading the change initiatives! The role of the steering group is to ensure that the conditions for success are put in place and maintained.  If the members of the steering group don’t have the decision rights (and resulting accountabilities) to put the conditions for success in place – either because they don’t have the authority or expertise – then they are simply the wrong people.

In summary, an organisation needs to establish the conditions defined above in order to increase the chances of making a change initiative successful.  These conditions can be assessed at the outset of a change initiative or at any point along the way, but what is of paramount importance is the need to assess the degree to which these factors are in place such that corrective action can be taken to bolster any that are weak and to identify any new ones that might be needed.  This can be a powerful way of creating the right ‘dialogue’ with different change stakeholders.